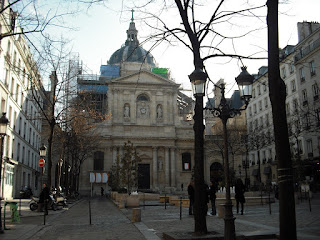 Oh La Sorbonne, how pretty you look in the morning. I would have tickled pink to attend my 8 am Contemporary Arabic Society class if you weren't so damn apt to go on strike...all...the...time...

My real classes started this week. Want to know how many I've had? One. Well two if you count "TD", which is the french version of recitation only it's a separate class with its own requirements. Upon reaching the Sorbonne Wednesday morning, I was greeted by striking hippie students handing out fliers. I had luckily stumbled upon the right wing and floor of the building, the plan of which by the way makes no geographical sense. Many classrooms simply have names like "Picard" (who is this Picard person and why is he everywhere?) and you just simply have to know where they are. When my professor entered the lecture hall I thought, oh sweet, she's not on strike. Instead she took up the microphone and proceeded to explain the reasons for the strike in rapid fire french worthy of speedy gonzales. Then another hippie student stole the microphone and I lost the ability to faire attention. At the beginning my TD, before the class had settled down and just after the professor had entered, another hippie slouched in her seat cheekily demanded why this professor wasn't striking. Apparently he can agree ideologically but still do his job. The TD was very stimulating (and intimidating) except for the part where the prof singled out all 10 americans in the class with one fell swoop.

I arrived at a different campus of the sorbonne for my music class only to find it was on strike indefinitely as well. My advisor informed me later that this would be a safety issue because this campus is the center of many demonstrations..

If this were Columbia I'd be rejoicing. But it's not Columbia, and not knowing when I'll ever have class the whole entire semester is weird. It's pretty fucking hilarious though how much French people strike. The only Americans self-riteous enough to greve it up would be greving against homosexuals and abortions, not changes in the educational system.

On a completely unrelated note, check out this article on what technology is doing to our attention spans:

http://blog.wired.com/wiredscience/2009/02/attentionlost.html
Posted by Alice Hu at 7:39 AM