Your greatest revelations will be in the park

Since the boat party and prodigy concert that smacked my ears up:

- went to l'opéra garnier and listened to a Greek tragedy in Italian to the stylings of Mozart with French subtitles. Moving but too many languages. Will definitely return to the opera. Bought someone else's tickets for the first time - for some reason the woman selling them targeted me and only me. Perhaps my munching on an olive roll made me look box worthy. A lot of gold and fancy shmance.

- Saw the Eiffel Tower up close and personal. Yes can you believe it's been this long? Saw the Andy Warhol exhibit. Nipples and color.. not a big fan of pop art but at least I know what he was all about now. Commission. Saw Ave Montagne - Chanel, Prada, YSL et cetera and the glitziest hotels in the brilliant sunshine. Sat on a green green lawn near Trocadero with the gamins and smelled the pollenated air of spring. Watched them be all entitled and carefree. Walked along a rooftop park. Went to a bio market with meticulous mountains of strawberries. Went to Palais de Tokyo. Hipster art abounds. Space Invaders! Search for them.

Check out fashionista for Manish Arora pics or my flickr for other pics as well. According to fashionista, I happened to stumble upon the best show of the bunch.

And so begins my electro filled week-end: First stop a red boat on the Seine that is also a club. A boat club. Called Le Batofar. Then Prodigy on Sunday. I should totally do some tectonic to prepare myself.
Posted by Alice Hu at 1:01 PM No comments: 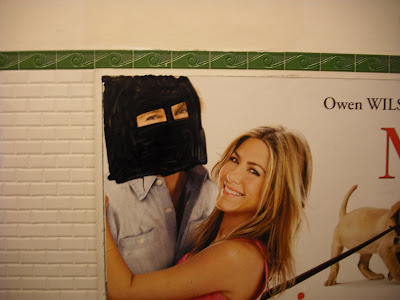 I pass this work of art almost everyday. I couldn't resist..

What really surprises me is the fact that the ninja mask wasn't pulled over the face of that woman
Posted by Alice Hu at 5:08 PM No comments:

I actually went to a fashion show 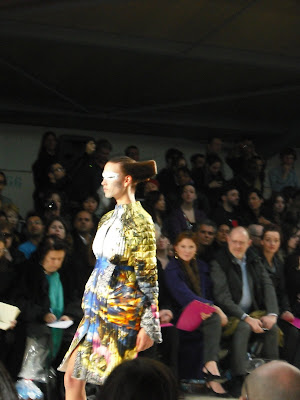 Manish Arora. 3ème Paris. It was a lovely grey afternoon when my companion and I decided to try and get into a défilé, french for fashion show avec catwalk. My other friends had already succeeded in getting into Yohji Yamamoto three days prior, so to be safe I picked a designer I had never heard of before.

I'm not sure how strict it is in New York, but it was pretty easy to get into the shows here (at least the 'smaller' labels... a couple of my friends are trying Chanel tomorrow morning.. we'll see how that déroules for them). At Yohji my friends split up and waited until the very end of the admittance when the door people started letting non-invites in. Some said they were fashion students and the others claimed to be buyers for obscure New York boutiques. But in the end they heard the glorious "allez-y".

For us we didn't have the luck of having two separate entrances for buyers and press to linger by at a distance to see what plan of attack to use. The garage door on the street opened up to rather small courtyard with another garage door at the end. One entrance. Fuck. It was quite amusing watching the people stream in - a lot of enthusiastic japanese people with odd hair and bright accessories, non descript behind the sceners and that curious old woman in the elevated black veil/hat/witch combo that I also saw at John Paul Gaultier. About an hour later we had moved right up to the enemy lines and then all of a sudden non-invitees were being let in. The great thing was that we didn't even have to pretend to be students, just waltzed right in at the sound of "allez-y" and climbed an ascending concrete path to the catwalk.

The show itself was amusing. It opened with some kind of african dancer getting all tribal on the catwalk. Overall the collection was super-saturated and multicolored with some fantastic displays of tigers, a 3D moose, a mechanically whirring headpiece, stravinsky's firebird, japanese slicked hair and bright eyemakeup that resembled masks. The dresses were beautifully crafted and all very structural. It was interesting to see the crazy mix of patterns, colors and materials in a very strucural form. Very Hindu, reincarnation-worthy fantasy vibes. I believe the Manish Arora is Indian if I'm not mistaken.

Outside I even got my picture taken. I was very pleased that my go to ensemble of frilly white chiffon dress, motorcycle jacket, grey tights, domanatrixy boots and slouchy camel bag was picture worthy. Not gonna lie though, I was so tempted to Satorialist every wench queuing outside. Alas I resisted for fear that such an act might diminish my chances of hearing those magical words: Allez-y!

Après we found a café on a main boulevard after torturing my 4-inch heeled feet a bit more, sat outside under heaters, drank wine, people watched and argued about whether Paris or New York had more variety. I think I won on the accessbility factor - you can definitely get a kick ass meal or what have you in New York for a lot less money and a lot less effort than in Paris.

On a side note, among the many observations I've been accumulating about Parisians, one of them is their method of appraisal for restaurants and cafés. The more people outside, the more likely it is they will stop there and boire un verre. If there are only a few people inside, even if it's a potentially good place to eat or drink, it's automatically nixed.

Comme toujours, allez voir my flickr for more pictures. This time around though you're better off looking at the runway pics somewhere else. I am uploading many more pictures from earlier, non-fashion related me related events.
Posted by Alice Hu at 3:47 PM 1 comment:

The women of Paris are beautiful does with chic clothes, perfectly-coiffed (or perfectly haphazard) hair, pretty brooding faces, pretty bodies and mannerisms that would make finishing school graduates in the states cry. That being said, however beautiful the women are, I have to say that the men win. At least in the area of demographics.

The 50% rule is as follows: whatever public space you find yourself in, whether it be on the metro or in the streets, at least 50% of the men will be incredibly good-looking, tall, skinny, well-dressed, well-groomed and never chauvinistic. If you happen to meet a not so cute French guy, statistics say that at least half of his friends are dashing chanticleers. It's so bad(good) that I've been completely desensitized to the fleet of glorious male models struttin around gettin up in my mojo. That being said, I will allow that they are a bit feminine. Leg crossing is a common practice among the male species, and most of the time their hair is long and falls at all the right angles.

French men also have no problem with touching and kissing each other a lot when they go out. I suspect this goes for all Europeans but it greatly confuses us American women because we think you're all gay or bisexual. But hey I think it's great. It takes a lot of confidence in your manhood to sit on your friend's lap, cross your legs, wear long hair like it's nobody's business, dress better than me, and wear pointy shoes all at once. In summation, take the lead singer of MGMT, multiply his attractiveness by a factor of 3, add a cigarette and times that by 1/2 the population of Parisian men and you get the picture.

Oh yea did I forget to mention that they love dating? Like, LOVE. Oh yea and hand holding. And PDA. All the shit that I thought disappeared with the invention of the telegraph.

I can't wait to get back to the beer-loving mysogynistic relationship-allergic lazy brotastic unrefined ungroomed darlings back home (I kid I kid.. but seriously free t-shirt + that one pair of jeans + sandals does NOT = outfit. EVER)
Posted by Alice Hu at 3:51 PM 2 comments: