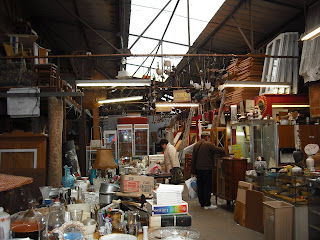 At the very end of the 4 train at Porte de Clignancourt in the 18e you will find a flea market. If you can brave the beggers, riff raff and general seedyness immediately surrounding the métro, you will find diagon alley "les puces" - literally "the fleas". Oddly enough, "ma puce" is a term of endearment which translates into sweetie. Oh btdubs happy saint valentin. If you're on the same boat that I am, I'm sure your day sucked too.

According to my friend who embarked on this journey, antique dealers and wholesalers come to this flea market to presumably make a huge profit off of their finds. The section we walked into (of which there are many, I'm told) mostly comprised of open air booths strongly reminiscent of chinatown, but being Paris and all there were many gems along the way. The vintage clothing booths are great - we found one with endless one of a kind blazers, burberry raincoats, very nice boots and other stuff you would actually want to wear. There was a booth filled with beautiful mahogony leather bags that were all very well crafted. Mentioning leather, there were a lot of leather jackets in great condition too. African furniture and Senegalese fabrics were a plenty, as were the obligatory generic clothing booths. A vintage book "librarie" heaved with shelves of quizzical publications and even had newspapers from 1914 pasted on the walls. Scattered about a table were photo albums from not this century and postcards from french people in the yester-years. The upside is you can pretty much find anything. The downside is, just like a night on the champs-elysées, you will probably be harrassed a little bit. Especially if you're speaking english very loudly. Although we were too cold and nancy-pantsy to stay and really look, apparently there is also incredible designer vintage clothing and jewelry in one of the many sections. With that said, I will definitely return on a warmer spring day.
Posted by Alice Hu at 2:24 PM