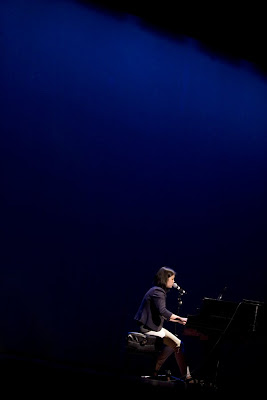 [Photo courtesy of Paul Kim for Massive Photography. See the youtube video of my performance here!]

Kollaboration New York was one of the coolest things I've done in a long time, and for the first time I truly realized how supportive and cool the Asian American community is here. I have all sorts of mushy gushy feelings for you golden coloured ones, and I am proud to call you my brethren. Basically Kollaboration is an orgiastic showcase of up and coming asian american artists around the U.S. in which people dress up in gladiator costumes and fight to the death contestants compete for a cash monay prize.

'Twas the 27th of June on a pleasantly hot New York day. I arrived at 11 am for my soundcheck for the 8 pm show. fml. No it was cool. In my off time I made the mistake of trying Dunkin' Donut's egg white sandwich, hung out with Marie Choi's band boys, bought a bilingual version of Les Femmes Savantes by Molière at La Librarie de France in Rockefeller Center (which closes in September wahhh), discovered that Pedelson's closed, ate a subway sandwich and had me some times with Alex of our youtube video fame in Washington Square park.

Next we did a red carpet. It was all shipped in from Caleefornia (d'après Arnold) and in front of one of those white tarps with logos. The level of hardcorety made me real nervous in front of the cams and my smile was that convulsing smile you get when you smile while nervous and I couldn't move my arm from its stupid akimbo position but alas at least it wasn't outside in public. The abcnews.com/allkpop interview was amusing. Among the usual questions musicians are posed there was the "what's your favorite asian food" question. I believe I actually ended the interview with "SIGN ME", with every intention to address the record companies that I mean to whore myself out to later this year.

Although I didn't actually introduce myself, Yin Chang of bespectacled fame on Gossip Girl was a total sweetheart and brought her adorable siblings and mother along to watch. She also looked smokin' hot and definitely a lot prettier in person without the rediculous nerd glasses. I rather fancied telling her I once upon a time got a call back for her part during the Kati Farkas era of token asian girl on Gossip Girl, but then I found myself irrelevent and digressed. Besides it's Nan Zhang I should smite. Just kidding let's have tea sometime.

The show itself was incredible - NYU's Skirballs center was sold out and the 800 people made quite the energetic audience. The comic relief in the form of PK and Eliot Chang made me pee my Cheap Mondays several times over, which was bad because they're white. The jeans that is. Everyone sounded or danced fabulously from what we could tell from the rehearsal room screen. I had the good fortune of meeting Alfa, this seriously talented girl who sounds like Sarah Borellis and is terrifyingly like myself in life situation. Bollywood Axion and Project D were crazy free stylin' and sweating up a storm. If you want to know what Bhangra freestyling is like, you can't. It's indescribable happiness in dance form.

In the end we did a tribute to Michael Jackson, and COBU, a traditional Japanese dance group, took home the big ass check. The afterparty at newly opened Hells Kitchen was a bit of a bust since the free beer and soju didn't show up, so I dragged my new Korean posse to Beatrice only to discovered it had closed. We ended up at Pop burger - which houses delicious but rul expensive burgers, fries, shakes etc. Ok fine... the fries were worth it. There was also a club in da back.. which was odd for a burger joint.

All in all, awesomeness. Thanks Kollaboration! Who knows.. maybe I'll be the next BoA.

In other awesomeness, my myspace likes to be clicked.
Posted by Alice Hu at 6:41 PM