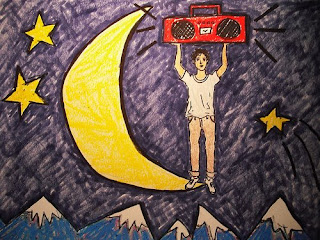 It's my second night in Paris and I'm exhausted out of my brain. Right before I left I finished my self-produced EP, "New Romantics", avail for free download at mon site Web tranquil http://alicehumusic.com. The EP is mad revamped from before - new vocals/instrumentals/mixing - the works. Above is the album artwork I did for it. It depicts a good-looking urban outfitters-clad dreamboat guy holding up a boombox for the ladies whilst standing upon a gargantuan crescent moon about to fall on the mountains below. It's basically my fantasy. 'Twas completed at 5 am in the morn.

Also I think I inadvertently made Ezra Koening my EP cover. I mean, doesn't it just scream Cape Cod Kwassa Kwassa? For you lazies, click on the image below to download the EP. You can preview it either at the website the image is linked to or at my MySpayce. 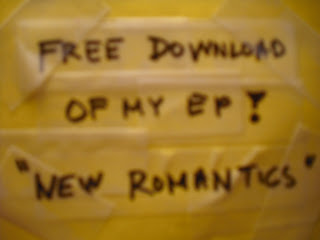 Now une petite histoire of my past two days. Let me just say that the flight was nothing short of epic. British Airways really likes treating people like the delicious cattle that they are queues, so much so in fact that every single person has to wait on long, several hundred people-long lines to check their baggage or change a connecting flight. When I arrived, half of my baggage managed to escape me and it was delivered to me this morning.

My host family is très gentille - they're an elderly couple and both professors. Tout va bien. My room is belle - there are two huge bookcases with everything from Sartre to "motorcars of the golden past". All the furniture is old school and just like the rest of Paris, cauched in the city's history. Refer yourself to my flickr for pix. (Blogger is being testy - is there a limit to the number of photos you can put up?) All the differences I expected to encounter I did - smallness of just about everything, formal dining, du fromage and du vin. Luckily my host mother is an excellent cook.

Today was orientation at Reid Hall. It vexed me slightly as to the obstinate usage of English by my Reid Hallmates, but I will be equally as obstinate in speaking le français. Reid Hall is an interesting sort of creature - a labyrinth of tight hallways and small classrooms around a central, very pretty courtyard. Aside from practical matters we learned that indeed pretty young lasses are often approached by french men - especially american women because well.. I don't think I need to explain. Apparently un parisien can tell an american even from behind - by the way we walk and dress. Perhaps also they compare the ratio of ass to torso, which is most likely larger for us américains. Also, it was encumbent upon one of our professors to inform us that French people never smile, even if they're ectastically happy. I wonder what they do instead?

I'm shooting for a story a day to give you a glimpse into my life in Paris. J'espère que ça souffi. Much museuming this week. And fête-ing this weekend.