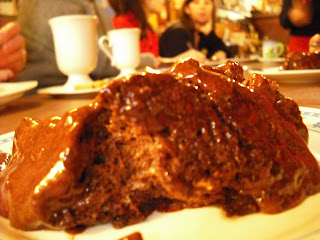 Chocolate cake from café des poètes - a café featuring candle lit poet readings and curiously fragant tea run by a wonderful couple and their little boy who can recite rimbaud by heart. The cake was absolutely delicious - soaked in chocolate but light as a feather. Parfait! The little boy was the most precocious thing - just like other french children. French children dress and act like mini adults - it's possibly the cutest thing ever.

Today marks the end of an epic orientation - 4 days of museums and free food. Many an encounter I did not expect to see. As always, go to my flickr for many more pictures. The museums were interesting and it was my first time at the louvre. It was vraiment surreal to see pieces like michelangelo sculptures in real life. I have to say the mona lisa (la jaconde) kind of sucks though - there's about a 15 foot radius around the painting, which is itself very small. The rodin museum was great too - the sculptures had an intense sensuality that quite frankly made me mal à l'aise.

On my first night out, I happened upon a gay bar (my first time surprisingly). In Paris the gay bars truly serve that clientèle - there were very few women. There were however a few vultures who had come to take the couple of straighties by surprise. About 1 minute or so after entering said bar, we noticed that there was a clear shower in the room. This shower featured a man in his delicates who proceeded to take a shower. The rest is history... whatever he was doing is DEFINITELY illegal in the states.

Hopefully my next nights en ville won't involve so many publicly naked men.
Posted by Alice Hu at 11:53 AM