Jean Paul Gaultier Show.. or my day as a pappa(rat)zi 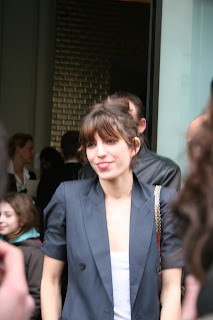 So what exactly is Kanye West doing in Paris? In addition to being great, he's OBVS here for the couture edition of fashion week. Or mens fashion week or something too schmancy for me. However easy he is to poke fun at, I must admit that he's a smart mofo. Instead of rollin' up to the main entrance where all the other hot messes were arriving, he decided to go 'round the side, resulting in my comrades and I turning around and finding none other than KWest the duke of greatness ferretting into JPG. "Wow, I could have just touched Kanye"

The picture above is courtesy of my stylish friend Kipling, who has a far superior camera to mine. This is Lou Doillon, daughter of Charlotte Gainsbourg. She was such a darling, posing for the papparatsmears and graciously obliging a fan photo, to which I yelled " T'es trop gentille!". Dig the red lips and hair.

Basicsly, me and some expats decided to crash the Jean Paul Gaultier show today. By crash I mean take pictures outside and make fun of ourselves. Kipling and I took it upon ourselves to take many pictures. I took it upon myself to yell profanities and odd things at the well-dressed people. It was kind of awkward when people got out and the paps didn't go ape shit. There were a lot of fake tanned people and a couple bitches who looked like they stumbled out of Jersey (the rich parts). Here's the list of people we recognized:

kylie mynogue, empress of munchkinland
carine roitfield, editor of french vogue
jourdan dunn and chanel iman, recently did a vogue editorial shoot together
lily donaldson, burberry face 2008
catherine deneuve, legendary french actress. doppleganger stars in grey's anatomy private practice
emily blunt, don't you find it so ironikal that you're at paris fashion week (sorta) when your poor same-name character who gets hit by a car in the devil wears prada was pwned by anne hathaway for the coveted opportunity to wipe fictional anna wintour's ass all day?

(Go to my flickr for fotos of many of these fairies)

The paps did go ape shit for kylie and kanye though. We thought something was amiss when we were almost crushed by french dudes yelling "keelie! keelie! s'il vous plaît!". You would think they would have gotten "kanye" right.. the name having obvious french origins and all. But I think the lack of the é confuses them. Or maybe its the many titles kanye has aquired from his surfs and vassals. We also thought that we maybe saw the sartorialist man ("but he's too orange to be the sartorialist guy!). I wanted to take a super meta photo of him, critique his outfit then proceed to e-mail it to him. Lily Donaldson was all late and stressed out with her cockneyed exclaimations that she forgot something as she was stepping out of her horsedrawn carriage limo. She made it though. Did you know that fashion shows are like.. 5 minutes long? It's like a greyhound race except with beautiful, leggy coat hangers.
Posted by Alice Hu at 11:04 AM