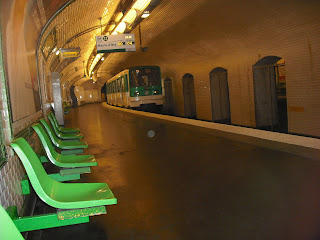 Welcome to the Paris métro. Clean, efficient and right on schedule. On every platform there's an LCD screen with the arrival time of the 1st and 2nd closest train. I spend a lot of time on the métro - he's a good friend of mine. He's an interesting fellow with doors that you must open manually with a lever and folding seats by the doors to save space. I just wish he wouldn't close so early - taxi fees add up and the noctulien (night bus) gives me the heebeejeebs. Each métro line is owned by a different company. Apparently different lines like to go on strike arbitrarily here and there. That will suck a little bit.

Last night was another night to remember. It was my first night out with only french people - specifically awesome grands écoles parisiennes who really know how to party. First stop was another grands écoles party, but this time it was at a club (not a nice one mind you). I have honestly never seen so many people my own age lined up outside or inside a club. The guys were surprisingly rowdy and pushy. What's great about clubs here though is that people actually go, not just nasty ass guidos and skankalicious hoes. People, especially guys, have almost no reservations about dancing their asses off and really having a good time. In true college spirit, paristech handed out cups and condoms to each atendee. Next stop was a friend's appartment, which had lovely wood framework in the ceiling and two GIANT lofted beds. After that, an australian bar where dancing on the tables is normal protocol. We ended the night with a heart healthy meal of fries and I'm not sure what else.

Far from being rude or impolite, I've found french people to be incredibly generous and loyal people. Even though I'm just some rando american student, these girls took me under their wing and really cared about my safety and how much fun I was having. My friend's host mother as well goes wayyy beyond what is required of her and often cooks incredible meals for her and her friends.

As always, see my flickr for more pictures. Until tomorrow my babies.
Posted by Alice Hu at 5:31 AM