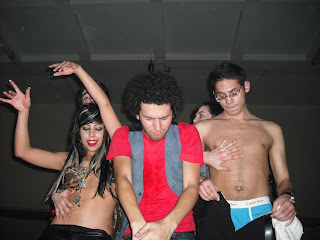 As always, go to my flickr or facebook for many more pictures. The story behind this picture goes this: for all of you who aren't aware, France has a very different education system. Everyone with a bac, essentially a highschool diploma that you have to pass a test for, can enter University. The creme of the crop, essentially ivy leaguers, must go through rigorous preparation (two more years of prépa usually after high school I believe) to maybe get one of the few coveted spots at the private schools - les grands écoles. This little gem was taken at a party at one such grand école, ENS (Ecole Normale Supérieure). ENS churns out France's future professors and big shots. Although it's very difficult to be accepted to one of these schools, once you are, you're pretty much set. This is pretty sweet I must say - I wish my Columbia degree could give me that much power after I graduated.

The little lady here proceeded to whoopsidentally let her leopard print bra come off and the nice young man spent many a several minutes with his pants down. The mec in the middle is a charming young bloke whom I met that night among a group of frenchies I've been fête-ing with. Although I highly doubt the people sandwiching my innocent young friend were étudiants of ENS, it provided endless entertainment for the huge dance floor, which brought me wayyy back to middle school. The gaggles of french nerds were quite endearing.

In other news, I've been in my mandatorialist intensive french grammar class everyday for three hours. It's great but confuses the heck out of me. I must say my favorite part of this whole language thing is learning slang. Generally counterintuitive but an integral part of spoken french. I've been eating very, VERY well... but I don't think this whole multi-course meal thing is working for my figure. It's pretty awesome being a student here as far as food is concerned - in any given cafeteria you can get a really decent meal for 2.80 euro. It's been a week since my last post.. but that will change! Tiddlebittles everyday (or nearly), I promise! You know you got to get into that whole rhythm thing.
Posted by Alice Hu at 10:12 AM